The Innova TL3 is a stable driver that was created after the popular Innova TL has been out for a while. It’s very comparable for the disc stats, but the TL3 is faster and has more control all while having have less glide.

After trying out the TL3 for a few rounds I thought it would be worth writing this in-depth review to cover the best uses, plastics, and weights for the Innova TL3.

Overview of the Innova TL3 Even though the original TL is a great disc for straight throws, the TL3 has even more control and stability to allow for more precise shots.

When throwing it at full power, you still should be able to get it to fly straight with only a small amount of fade at the end of the flight.

I will say one thing I like about the TL3 is that it feels like a good mix between a midrange disc and distance driver. With the slower speed of 8 it doesn’t require much power to actually get decent carry and distance from your throws.

It’s also one of the most accurate and controllable discs that I’ve ever thrown.

That’s my quick and easy review of the TL3, now let’s get into the disc stats and most common uses! 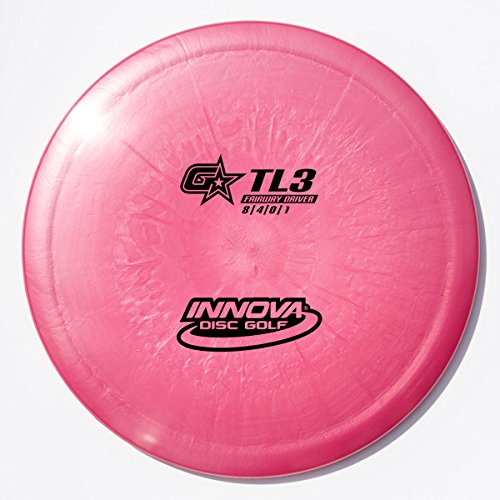 Check Price on AmazonView on Infinite

You can find this disc golf disc in the following molds; DX TL3, Star TL3, GStar TL3, and Champion TL3.

Here’s an image to show the normal flight path that you can expect with the TL3.

Best Throws for the Innova TL3

From my experience, the best throws for the Innova TL3 are:

Accurate – Some discs are easier to control than others, and this one can easily be maneuvered and thrown for accurate lines and distances. You’ll have no trouble keeping this disc on the fairway or heading right at the basket.

Straight – The TL3 is one disc that can be thrown straight at your target without having the disc move away from that initial line. Whether you’re throwing through a tunnel of trees or just going straight at the basket, you’ll have no problem keeping the TL3 traveling fast and on a straight line.

Low-ceiling – If you don’t have a lot of space to throw your disc, using this disc will let you keep it low and flat through any obstacles. Throw it fast and it’ll glide right over the ground for the entire flight.

Which Players Should Use the Innova TL3?

When looking at fairway drivers the first thing you might notice is that they have less speed compared to distance drivers. They usually require less arm speed to throw far, but fairway or control drivers are excellent at placement shots and angle control.

Since this disc has a tag of beginner, that means it’s the perfect option for newer players to try out. That doesn’t mean that more experienced players shouldn’t use it, just that it’s easier for beginners and newer players to control and use.

Where Can You Find the Innova TL3?

As an experienced player, my preferred place to look for certain disc golf discs like the TL3 is at any local disc golf shop in my state. If I can’t find the disc in-store, there are two online shops that I always prefer to shop at.

Discs Related to the TL3

Check out these similar disc golf discs to the TL3 and read through my full reviews below!

Innova TeeBird3 – Known as one of the most consistent and reliable fairway drivers from Innova.

Innova Dragon – One of the lightweight drivers from Innova that has grippy plastic and floats in water.

In my TL3 review I covered the key aspects any disc golfer should know about a disc, including:

If you’ve ever thrown and enjoyed using the Innova TL, it might be worth giving the quicker TL3 a chance next time you play!